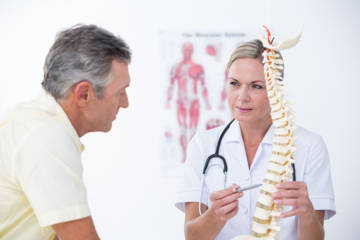 Some Sex Positions can Actually Cause Greater Back Pain and Suffering.

For men who find it painful to put their backs into it during sex, a Researchers Document study suggests that some positions are better than others.Many of you know that I try to read medical abstracts related to my personal injury law practice. Sometimes I will blog about those I find interesting. However, it is not often that I find research that I KNOW will be interesting to the general population as well as those involved in the world of personal injury law.

The University of Waterloo in Canada has published a preliminary report, earlier this month, introducing their efforts to produce medically-sound research to advise the best sex positions for men with bad backs. To do this, the researchers documented the way the spine moves during sex in order to find out why certain sex positions are worse than others in terms of producing back pain.

They literally attached motion-capturing electrodes (the way a video game maker might do to an athlete performing his/her sport) to couples engaging in five common sex positions.Spooning was previously a doctor's go-to suggestion for how to minimize back pain, however; this study found that different movements, thrusting techniques, and positions can trigger different types of back pain depending on the type of back injury. Here are some specific recommendations from the paper:

I'm not being graphic, this is science! The U of W expects to publish a paper focusing on women with back pain soon.

A study involving mice shows that administering xenon gas can significantly reduce the effects of traumatic brain damage. Xenon has anesthetic properties that might protect brain cells from injury. The mice were administered different levels of xenon at different time intervals after a controlled force was applied to their brains (they were under anesthesia).

The xenon treated mice showed lower levels of neurological deficits (such as balance problems) up to 30 days post injury, but especially if administered within three hours of the injury. The lead researcher, Dr. Dickenson from the Department of Surgery at Imperial College in London explained that after acute head trauma, most of the brain damage happens in the hours or days following the trauma (not right away).

The National Academy of Neurosciences has shown that damage to one of six major areas of the brain (as opposed to damage to other sectors) are much more likely to result in significant cognitive impairment as measured by Functional MRIs (F-MRIs), including attention span, emotional control, memory, and reasoning ability. These sectors have a higher number of neural connections and are referred to as neural hubs.The Journal of Neurotrauma published research showing:

Diffuse Tensor Imaging (DTI) refers to a specific type of MRI that detects microscopic changes in brain matter. Neurologists are finding DTI-MRIs very useful in predicting which Mild-Traumatic Brain Injury sufferers are likely to experience ongoing problems 3-6 months after their head injury. This is because the DTI-MRI can show significant microscopic differences in white matter that might not appear on traditional MRIs or CT scans. The DTI MRI identified changes in white matter that could be associated with certain function impairments and cognitive processing speed months after the injury.

ABIM Foundation has published its Choosing Wisely list of issues patients should address with their doctors and physical therapists to increase the likelihood of creating a rehabilitation plan well-tailored to the unique circumstances of each individual patient. Here is a sample of their suggestions:

Surgery to repair hip fractures produces a sizable return on investment: the long-term medical cost savings (compared to those who refused surgical intervention) is estimated to be above $165,000.00 including rehab therapy and nursing home care. In addition, those who elected the surgery could expect about two additional years of life according to this long-term study.

Wash U researchers believe they are beginning to be able to identify weak spots in muscles, bones, and tendons that are prone to breaking, fracturing or tearing (tendons are always stretching, bones bend and compress as a result of normal living, these can lead to small tears and cracks). This could be used to locate such minor strains and injuries that are likely to lead to more disastrous problems. The researchers emphasized that their model needs refinement but may be used on actual patients in the near future.

An injured person's level of activity is strongly correlated to their recovery. Rotator Cuff Tear: those who were more active were less likely to find positive results from conservative physical therapy alone. As for Anterior Cruciate Ligament (ACL) Tears more activity = higher risk for re-injury. The article explains that doctors need to do a better job of assessing their patient's activity level when deciding on which graft to use during the ACL repair surgical procedure.